The Board of Directors of Infrastrutture Wireless Italiane S.p.A. (INWIT), met today under the chairmanship of Piergiorgio Peluso, and has examined and approved the Interim Financial report at 30 September 2019.

The adoption of IFRS16 since the beginning of 2019 has modified the composition of the main economic and financial indicators, precluding immediate comparison with previous period results. The income statement and financial position figures for the first nine months of 2019 prepared in “comparable” terms are also shown in this document to enable a comparison of income and financial data for the first nine months of 2019 with the corresponding period of the previous year; said date were prepared using the previous accounting standards.

In greater detail, the following items are highlighted for the first nine months of 2019:

“The figures of the nine months of 2019 confirm that INWIT’s industrial performance continues to guarantee the company’s growth. INWIT was, and still is, busy with finalising the long-term partnership agreement with Tim and Vodafone, which will soon lead to the birth of the number one infrastructure operator in Italy”, said the CEO Giovanni Ferigo. “This new company will have the resources and capacity to support the development of 5G and the new wireless technologies while supporting the projects of all the subjects operating in the sector and allowing the country to confirm its leadership role in mobile telephony that it has won in recent years”. 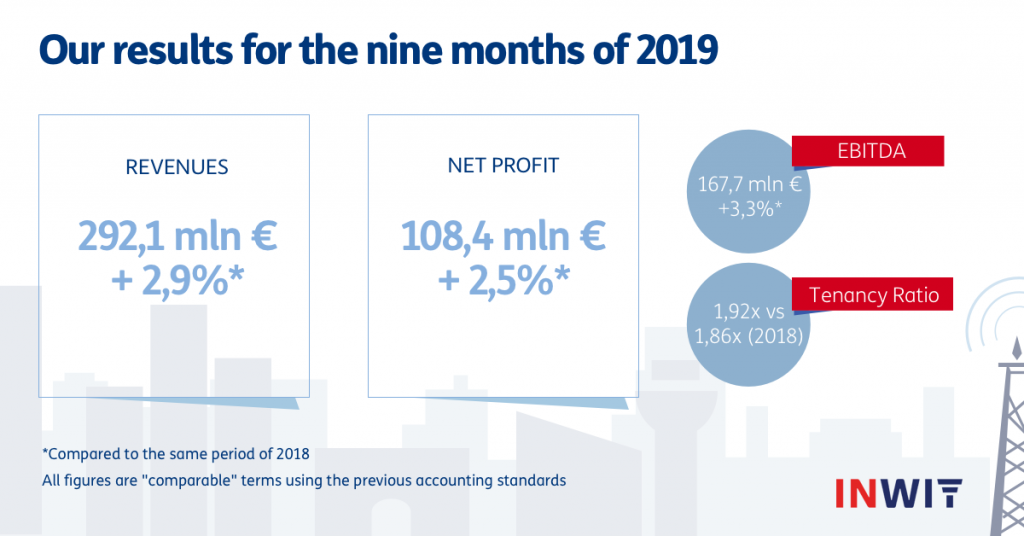 The wireless infrastructure market is continuing its profound transformation and demand for services from mobile operators and other radio network operators is growing.

Mobile Operators must increase their Service Access Points to expand 4G coverage and prepare for the transition from 4G to 5G. Wireless Fixed Access providers are also expanding their networks to increase coverage and improve the quality of service offered to customers.

Other radio network operators such as IoT and “Public Safety” providers are already on the market and new entrants are expected to specialise in specific product/market relationships through the innovative use models enabled by 5G.

These market dynamics, combined with the growing willingness of operators to share network infrastructure elements, lead INWIT to expect, as previously communicated, further growth in traditional business and a strong acceleration in new businesses.

With reference to the Vodafone Towers integration operation, please refer to the Press Release published on 26 July 2019.